Have you ever heard the song, “That’s Not My Name?” It’s an unusual song by an eclectic group. It’s not the type of music I normally listen to, but it is the type that can get stuck in your head. The lyrics aren’t very creative, though they are effective.

Our parents named us, and we name our children. Some opt for family names while others choose ones by how they sound or have a meaning they hope the child will grow to fulfill. Some cultures even wait until meeting the child to select a name.

As toddlers, we learn to answer to the name we’ve been given. When we go to school, we painstakingly learn to spell it one letter at a time. Family and friends can give us nicknames, but we learn quickly that when our parents call us by our full name we’d better come quickly.

There are other names we acquire over time. They may come from siblings, teachers, parents, the world in 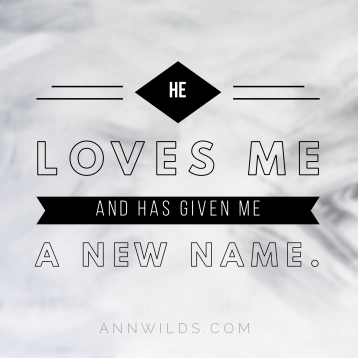 general, or even from ourselves. Though we may not ever verbally answer to these additional names, they can become our identity nevertheless. Names like  ugly, stupid, disappointment, liar, gossip, less than, lazy, unwanted, angry, rude, clumsy, trash, incompetent, gossip, mean, or simply failure.

But neither the names our parents give us, nor the ones the world supplies, are who we really are. Only God can give us our true name. The Bible is full of stories of people who discovered and lived up to their true God given name.

His parents named him Abram; the world named him Childless, but God named him Father of Nations. Through Abraham God’s chosen people were established.

Her parents named her Rahab; the world named her Prostitute, but God named her Helper. Through her the lineage of Jesus flowed.

His parents named him David; the world named him Lowly Shepherd, but God named him Man after My Heart. Through him a kingdom flourished.

His parents named him Saul; the world named him Zealot, but Jesus named him Apostle. Through Paul the gospel message was shared with the Gentile world.

His parents named him Jesus; the world named him Teacher, but God named Him Beloved Son. Through Jesus the world finds eternal salvation.

The enemy loves to steal our identity from us. He knows that if he can convince us to answer to another name, we diminish, and can even altogether lose, our effectiveness and our power.

We live a lesser life when we don’t know our true name.

But he can only do what we allow. It is our choice to live up to the identity God has given us or to settle for something less. When false names are thrown at you, reject them outright. Sing out “that’s not my name”, and embrace your Kingdom identity. If you aren’t sure of your name, ask God to reveal it to you. It’s there in His Word.

Imagine all that we might do if we each recognized and answered only to our God-given name, names like Beloved, Cherished, Friend, Courageous, Forgiven, Overcomer, Delight, Light Bearer, Servant Hearted, or Encourager. The name you choose to live by today will make all the difference in the world.

But the one who enters through the gate is the shepherd of the sheep. The gatekeeper opens the gate for him, and the sheep recognize his voice and come to him. He calls his own sheep by name and leads them out. -John 10:2-3