Mom’s mind isn’t what it used to be. Her sharp, former librarian and newspaper-editor mind, once a steel trap of information, is befuddled from dementia. She lived with us for twelve years in Texas but is now in an assisted living facility in our hometown in Louisiana, where most of our family resides.

Communicating with her in person can be a challenge in and of itself but the phone adds another layer of complexity. Occasionally, she’ll hang up or put the phone on her bad ear, but most of the time we manage to have a semblance of a conversation. Though she often forgets I called the moment we hang up, I still strive to do it regularly.

During a recent call, I was at a complete lost of what she was telling me. But instead of allowing myself to grow frustrated at not being able to comprehend her thinking, I intentionally chose to focus on simply enjoying the sound of her voice. 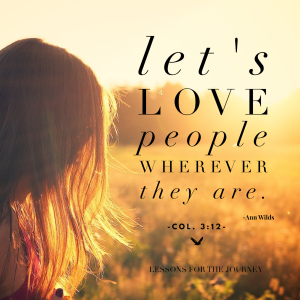 You know, the world is full of people that you and I may never understand. People whose beliefs, values, and choices differ greatly from our own. We may find them in our families, across the street, or on the other side of the world. And though we may not understand their reality, or even remotely agree with it, we can still honor them for who they are–a image bearer of God.

Jesus spent much of his earthly time with people whose lifestyles were different than His values. He didn’t agree with or approve of their choices, but He showed them love and compassion never-the-less. We don’t ever have to agree on something to be kind.

Message for the Journey:

Loving someone sometimes requires correction. Other times it requires providing direction. But most often it simply means one thing–loving them wherever they are.

Since God chose you to be the holy people he loves, you must clothe yourselves with tenderhearted mercy, kindness, humility, gentleness and patience.
Col. 3:13